Přidáno před 2 rokem nazpět od admin
56 Zobrazení
AirClips.com supports the pilot’s profession and all those interested in dedicating their lives to the beauty of flying.

The Diamond DA42 Twin Star is a four seat, twin engine, propeller-driven airplane developed manufactured by Austrian company Diamond Aircraft Industries. It was Diamond's first twin engine design, as well as the first new European twin-engine aircraft in its category to be developed in over 25 years. During 2004, the DA42 became the first diesel-powered fixed-wing aircraft to perform a non-stop crossing of the North Atlantic.
By 2012, the DA42 had become a key revenue generator for the company, having gained popularity with government and military operators in addition to the civil market that had suffered as a result of the Great Recession. Government customers have typically employed the type in the aerial surveillance role, which contributed towards the development of the Aeronautics Defense Dominator, a medium-altitude long-endurance (MALE) unmanned aerial vehicle (UAV), which had been derived from the DA42.
The flight performance of the DA42 is largely favourable, having been designed to incorporate not only high levels of performance but the greatest possible degrees of passive safety in operation, alongside excellent fuel economy and assisted by the implementation of various modern technologies. The flight controls themselves are proportionally responsive for performing even small manoeuvers and light motions. Both pilots are equipped with their own fighter-style central sticks, which are attached to an otherwise unobstructed cockpit floor.In a similar manner, a single combined power lever is used to regulate both the engine and propeller settings; the power levers are convenient and can be operated in a relatively easy manner. In comparison with other twin-engined aircraft in its category, the centre console of the DA42 is uncluttered, which is a result of the clean design of the controls.
The stall characteristics are also relatively benign, being described by Flight International as "probably the most docile of any aircraft I can remember". On the DA42, stall conditions are forewarned by the sounding of a warning horn at 5-7kt above stall, as well as by elevating levels of airframe buffeting and a 5–10° drop of the nose. The aircraft is relatively difficult to stall outside of substantial mishandling or deliberate intention. Both longitudinal and lateral stability can be maintained with a relatively low level of effort, not necessitating continuous trimming while the aircraft is accelerating. Active use of the rudder is necessary for effective turns and counteracting sideslip tendencies.
While the DA42 is a twin-engined aircraft, this is predominantly a measure for safety. It is readily capable of sustained flight using only a single engine, and can still achieve a satisfactory rate of climb of 700 feet per minute under single-engine operations, unlike many of its contemporaries. The DA42 possesses considerable endurance, being capable of performing 13 hour-long flights without carrying additional fuel tanks; this is partially due to its high fuel efficiency of its Austro engines, which consume 13.6 US gallons per hour when operated at 75 per cent power, lower than some of its single-engined rivals. The digital FADEC (full authority digital engine controls) serves to lower operational difficulty, constantly performing tasks such as managing rpm and fault-checking. 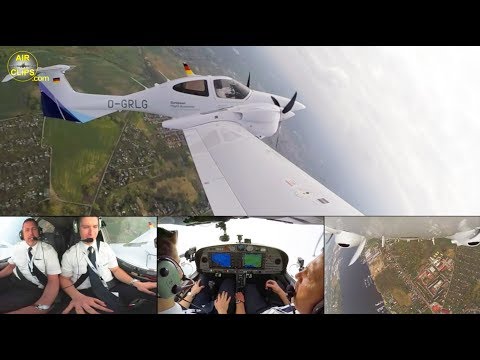 AirClips.com supports the pilot’s profession and all those interested in dedicating their lives to the beauty of flying. In a special series we are re...