Přidáno před 3 rokem nazpět od admin
81 Zobrazení
AirClips joined ALS Airlines on a humanitarian flight mission. Both flights from Nairobi Wilson to Kakuma (North Kenya) and back will be released as "ULTIMATE COCKPIT MOVIES". This is the second of both films showing the refugee-flight from Kakuma back to Nairobi Wilson. You'll witness an emotional mission with refugees, boarding the flight of their lifes. The pictured Dash 8 is the seventh aircraft of that type ever built.

The Bombardier Dash 8 or Q-Series, previously known as the de Havilland Canada Dash 8 or DHC-8, is a series of twin-engine, medium range, turboprop airliners. Introduced by de Havilland Canada (DHC) in 1984, they are now produced by Bombardier Aerospace. Over 1,000 Dash 8s of all models have been built, with Bombardier forecasting a total production run of 1,192 aircraft of all variants through to 2016.
The Dash 8 was developed from the de Havilland Canada Dash 7, which featured extreme short take-off and landing (STOL) performance. With the Dash 8, DHC focused on improving cruise performance and lowering operational costs. The engine chosen was the Pratt & Whitney Canada PW100. The aircraft has been delivered in four series. The Series 100 has a maximum capacity of 39, the Series 200 has the same capacity but offers more powerful engines, the Series 300 is a stretched, 50-seat version, and the Series 400 is further stretched to 78 passengers. Models delivered after 1997 have cabin noise suppression and are designated with the prefix "Q". Production of the Series 100 ceased in 2005, and the Q200 and Q300 in 2009.

ALS – Aircraft Leasing Services is a regional airline based in Nairobi, Kenya. ALS started operations in 1985 with a single two-seat Cessna 150 which was initially leased out to a flying school; and has seen steady growth ever since. ALS started operations in 1985 and over the years has seen steady growth ever since. Today, as an industry leader, ALS offers a range of customized and comprehensive aviation solutions for the benefit of Humanitarian Operations, Airlines, Oil/ Resource exploration, and VIP Clientele.
ALS passed supplier qualification requirements of many global organisations like:
the World Food Programme (UNWFP)
the International Committee of the Red Cross (ICRC)
the Medicins Sans Frontieres (MSF)
Rwanda Air (Rwandair)
Woodside Energy
In addition, ALS has completed its IOSA certification process and has as a result succeeded at becoming a part of the elite list in international aviation.
ALS services include:-
ACMI Leases (Aircraft, Crew, Maintenance, Insurance)
Schedule Flights
Helicopter services
Ambulance/Evacuation flights
Humanitarian charters
Corporate Charters
Executive and VIP Charter flights
Aircraft maintenance
Engineering and consulting
ACMI Leases

Kakuma is a town in northwestern Turkana County, Kenya. It is the site of a UNHCR refugee camp, established in 1991. The population of Kakuma town was 60,000 in 2014, having grown from around 8,000 in 1990. In 1991, the camp was established to host the 12,000 unaccompanied minors who had fled the war in Sudan and came walking from camps in Ethiopia.
Kakuma is situated in the second poorest region in Kenya and as a result of this poverty, there are ongoing tensions between the refugees and the local community that has occasionally resulted in violence. Compared to the wider region, the Kakuma camp has better health facilities and a higher percentage of children in full-time education, which resulted in a general notion that the refugees were better off than the locals. The host community is composed largely of nomadic pastoralists who stick to their traditions and don't co-operate with refugees. Camp is becoming a normal part of the regional socio-economic landscape and a part of livelihood options available in the region. Kakuma is one of two large refugee camps in Kenya; the second and bigger one is Dadaab.
Malnutrition, communicable disease outbreaks, and malaria are all ongoing problems, while donor support has faltered due to conflicts in other parts of the world. Many people in Kakuma are long-term refugees, living in hopelessness and desperation. The situation is particularly bad for young people. Many of the refugees hope to leave Kakuma for third country resettlement in another country. For example, the "Lost Boys of Sudan" were a special group who were resettled from the camp to the United States. 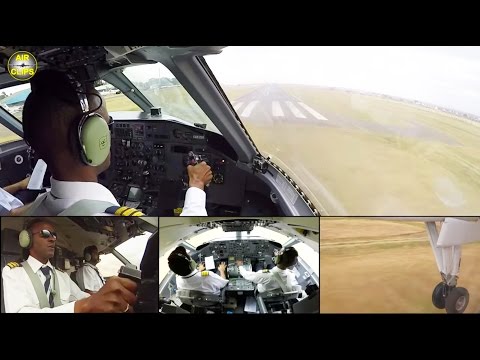 AirClips joined ALS Airlines on a humanitarian flight mission. Both flights from Nairobi Wilson to Kakuma (North Kenya) and back will be released as &...