Přidáno před 1 rok nazpět od admin
29 Zobrazení
EW-328TG, a truly classic 36 year-old Antonov 26B Cargo airplane of Genex Airlines, Belarus, performed two once-in-a-lifetime go arounds for some two dozens of aviation lovers aboard this special Merlintour charter flight. Want to experience that yourself? You can have it! Visit https://bat.flymerlin.by and if you state you come from AirClips.com, you automatically participate in our price draw! Have fun and good luck!!! As the flight happened today, this is just a quick appetizer for you. The full clip will be edited and uploaded later. The airplane took off from and landed at Minsk International airport and the joyride took more than one hour.

GENEX LTD was registered in 1997 on the territory of Minsk National Airport as a customsagency and a transport-expediting enterprise dealing with international transportations both by automobile and air transport.
In June 2003, the company’s management made up a decision about further development as an airline. The first An-2 aircraft was purchased that further on operated flights for geomagnetic survey, as well as parachute assault and aeronautic chemical activities. In 2006 the company started to operate international cargo flights by An-26B.
Over the last years the customs agency with a staff of 3 has grown to a transport enterprise with its own air fleet and personnel of 45 employees.
During many years of company’s existence each of the subdivisions managed to accumulate an extensive customer base and has proven to be an efficient business partner. In the sphere of air cargo carriage they carry on cooperation with Belavia, Lufthansa Lot and Czech Airlines.
In the sphere of cargo transportation under customs supervision domestic industry flagships have been Genex clients for many years (such as BELAZ, Belorussian Steel Works, NAFTAN, MINSK TRACTOR WORKS, as well as a wide range of commercial organizations who consider just on line delivery of bonded goods as a critical matter.
In the sphere of customs services agency (customs clearance services) organizations of various property categories are among Genex clients: starting from sole proprietors to state enterprises and diplomatic missions.
In some cases Genex services are highly in-demand among individuals delivering (sending) goods for personal use from abroad (out of borders) or those who meet the necessity of customs processing of their baggage on their way to/from the country.

The Antonov An-26 is a twin-engined turboprop civilian and military transport aircraft, designed and produced in the Soviet Union from 1969 to 1986. After successful operations of the An-24T tactical transport in austere locations, interest in a version with a retractable cargo ramp increased. Initial studies for the retractable ramp were carried out as part of the projected An-40 medium transport. When given the go-ahead for the An-26 in March 1968, the Antonov OKB adapted the ramp design of the An-40 to the An-24 fuselage, resulting in the An-26. Particular attention was given to the military mission, and the majority of early An-26 production was delivered to the VTA (voyenno-transportnaya aviatsiya).
Using the majority of the An-24 airframe, with its high-set cantilevered wings, twin turboprops and stalky main undercarriage, the An-26 included military equipment, such as tip-up paratroop canvas seats, an overhead traveling hoist, bulged observation windows and parachute static line attachment cables. The An-26 made its public debut at the 27th Paris Air Show at Le Bourget where the second prototype, CCCP-26184 (c/n00202), was shown in the static aircraft park.
The An-26 is also manufactured without a license agreement in China by the Xian Aircraft factory as the Y-14, later changed to be included in the Xian Y7 series.
An-26B is a civil cargo version equipped with roller gangways which can be swung up against the cabin walls when not in use. It was also equipped with two ZMDB Progress (Ivchyenko) Al-24VT turboprop powerplants to deliver higher thrust. 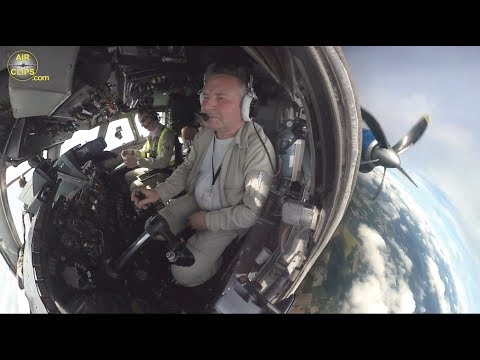