Přidáno před 2 rokem nazpět od admin
46 Zobrazení
AirClips joined a full flight from Kryvyi Rih to Kropyvnytskyi (former Kirovograd) in Ukraine to include a training go-around in Kryvyi Rih. We joined this mission with 15 video cameras placed all over the plane and are glad to release all STUNNING footage to the public - all for free as always.

The pictured flight was the last leg of UR-ELIs journey back from an United Nations assignment in Africa to its home base in Kirovograd. On the same morning the airplane already flew-in from Turkey on its long ferry flight. The last en-route stop in Kryvyi Rih was necessary for Ukrainian customs formalities since final destination Kirovograd only features a small domestic airfield.

URGA International Joint Stock Aviation Company is a charter airline based in Kropyvnytskyi, Ukraine. It operates charter passenger and cargo flights from various Ukrainian airports to destinations in Greece, Slovakia, the Republic of Macedonia, Turkey, Syria, United Arab Emirates, Germany, Italy, Denmark, Bulgaria, and Cyprus. Its main base is the Kropyvnytskyi Airport (KGO). The airline was established and started operations in August 1993. It was founded as International Joint Stock Aviation Company URGA, initially concentrating on charter flights. Regular passenger flights from Kiev and Kryvyi Rih were added in May 1997. Air Urga is owned by the State Property Fund of Ukraine (51%) and American International Consulting Corp (43.5%). It has 378 employees. The Air URGA fleet includes seven Saab 340B, three Saab 340B Plus, four Antonov An-26-100 combi, one single Antonov An-26 full cargo plane and one Cessna 172 for training and sightseeing flights as well as local transport missions.

The Antonov An-26 (NATO reporting name: Curl) is a twin-engined turboprop civilian and military transport aircraft, designed and produced in the Soviet Union from 1969 to 1986. After successful operations of the An-24T tactical transport in austere locations, interest in a version with a retractable cargo ramp increased. Initial studies for the retractable ramp were carried out as part of the projected An-40 medium transport. When given the go-ahead for the An-26 in March 1968, the Antonov OKB adapted the ramp design of the An-40 to the An-24 fuselage, resulting in the An-26. Particular attention was given to the military mission, and the majority of early An-26 production was delivered to the VTA (voyenno-transportnoy aviatsii).
Using the majority of the An-24 airframe, with its high-set cantilevered wings, twin turboprops and stalky main undercarriage, the An-26 included military equipment, such as tip-up paratroop canvas seats, an overhead traveling hoist, bulged observation windows and parachute static line attachment cables. The An-26 made its public debut at the 27th Paris Air Show at Le Bourget where the second prototype, CCCP-26184 (c/n00202), was shown in the static aircraft park.
The An-26 is also manufactured without a license agreement[1] in China by the Xian Aircraft factory as the Y-14, later changed to be included in the Xian Y7 series. The An-26 has a secondary bomber role with underwing bomb racks. In the bombing role it was extensively used by the Sudanese Air Force during the Second Sudanese Civil War and the War in Darfur. Also Russian Forces train with the An-26 as a bomber. 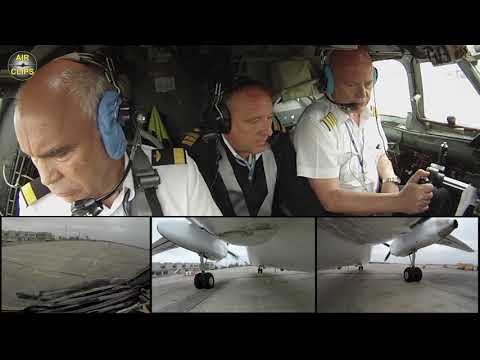 AirClips joined a full flight from Kryvyi Rih to Kropyvnytskyi (former Kirovograd) in Ukraine to include a training go-around in Kryvyi Rih. We joined...