Přidáno před 5 rokem nazpět od admin
213 Zobrazení
The Lockheed L-1049 Super Constellation is an American aircraft, a member of the Lockheed Constellation aircraft line. The L-1049 was Lockheed's response to the successful Douglas DC-6 airliner, first flying in 1950. The aircraft was also produced for both the United States Navy and Air Force as transport and AWACS aircraft.
Since 1943 Lockheed had been planning a stretched variant of the Constellation family. The first was an L-049 with a fuselage lengthened by 13 feet (4m). The next was an L-749 lengthened by 18 feet (5.5m). Neither was built due to the lack of suitable engines on the civilian market.
In 1950 Lockheed had repurchased the XC-69 Constellation prototype from the Hughes Tool Company. The XC-69 however, was equipped with four Pratt & Whitney R-2800 radial engines instead of the Wright R-3350s used on production models (Lockheed had made that installation on the prototype to test the R-2800 as a possible engine option for the L-049). Lockheed lengthened XC-69 by 18 feet (5.5m), to become the basis for the L-1049 Super Constellation. The aircraft first flew later that year still fitted with R-2800 engines, then was refitted with R-3350 956-C18CA-1 engines with jet stacks for slightly increased thrust. Later modifications included strengthened landing gear and larger vertical stabilizers. Eastern Air Lines ordered 10 aircraft, while Trans World Airlines (TWA) followed with an order for 14. The L-1049 had some 550 improvements and modifications compared to the L-749, including greater fuel capacity, rectangular windows, larger cockpit windshields and improved heating and pressurization.
In 1953 R-3350 Turbo-compounds were made available for civil use. Lockheed incorporated them into the L-1049C, which first flew on February 17 of that year. The R-3350-972-TC18DA-1 turbo-compound engines on the L-1049C had a new turbine system, the Power Recovery Turbines (PRT). Each engine's exhaust gas flowed through three turbines, increasing power by 550 hp (410 kW). One drawback of the PRT was the visible flame from the exhaust pipes; this was resolved by placing armor plating 2 in (5.08 cm) thick under the stack. The L-1049C had a higher cruising speed and climb rate. Although still lacking the range of the DC-6B, the L-1049C was now identical in performance to the Douglas and could carry a larger payload. The wings of the new model were strengthened, cabin soundproofing was increased, and the landing gear retraction system was improved. A new series of interior layouts was offered for the new model; "Siesta" (47 Passengers with increased luxury), "Intercontinental" (54 - 60 Passengers) and "Inter-urban" (105 Passengers). Each of these new layouts included reading lights at each seat. 48 L-1049Cs were built, being used by Eastern, TWA, Air France, KLM, Trans-Canada Air Lines, QANTAS, Air India, Pakistan International Airlines, Avianca, Iberia, Línea Aeropostal Venezolana and Cubana de Aviación.

The Breitling Super Constellation: Swiss watch manufacturer Breitling sponsored a restoration of a C-121C Super Constellation, registration N73544, that is based in Basel and has since been featured in its advertisements. This plane is now registered in the Swiss Aircraft registry as HB-RSC. The SUPER CONSTELLATION FLYERS ASSOCIATION will base its Super Constellation at the EuroAirport of Basel-Mulhouse-Freiburg.
HI-583CT in the Dominican Republic was the only and last airworthy Super Constellation commercially registered in the world. But she needed some repairs and a full systems check. A FAA certified engineer and Constellation specialist supervised the 2 months maintenance in Santo Domingo. Despite the hard work, N105CF did not receive the “Standard airworthiness certificate” which is necessary to carry passengers. The decision was taken to stop all the work on the Connie and to look for an alternative which will allow the Connie project to continue.
In Spring 2003, negotiations with the owner of the “Camarillo Connie” took place and an agreement was found for a lease/purchase of N73544 (one of the last 4 Connies still flying in the world).
At the end of April / beginning of May 2004 the ferry flight took place and we flew in 6 legs.
Since then SCFA visitied various airshows in and abroad to the delight of thousands of people. As mentioned above SCFA looks for members, donators and sponsors to continue our project as long as possible. At the same time the Executive Committee of SCFA will inform and invite members and/or guests to fly onboard the Connie for the events that they intend to participate). 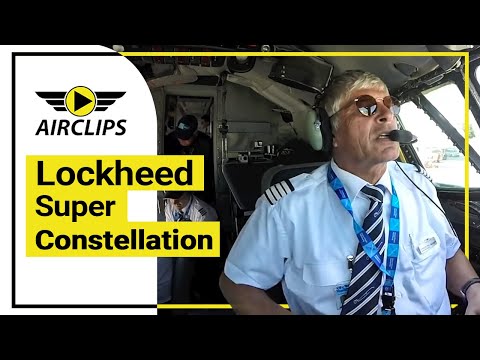