Přidáno před 2 rokem nazpět od admin
73 Zobrazení
AirClips.com had the great opportunity to join a Sundair A320 flight from Kassel-Calden airport to Tenerife South in spring 2018.

Sundair is a German leisure charter airline headquartered in Stralsund and based at Berlin Tegel Airport and Kassel Airport. In September 2017, the airline received its Air operator's certificate and commenced operations on 1 July 2017 with flights to Heraklion and Hurghada. Sundair operates flights from Germany to holiday destinations in The Mediterranean and North Africa mainly from Berlin Tegel Airport and Kassel Airport. As of February 2018, the airline serves the following charter destinations:

The Airbus A320 family consists of short- to medium-range, narrow-body, commercial passenger twin-engine jet airliners manufactured by Airbus. The family includes the A318, A319, A320 and A321, as well as the ACJ business jet. The A320s are also named A320ceo (current engine option) after the introduction of the A320neo (new engine option). Final assembly of the family takes place in Toulouse, France, and Hamburg, Germany. A plant in Tianjin, China, has also been producing aircraft for Chinese airlines since 2009, while a final assembly facility in Mobile, Alabama, United States, delivered its first A321 in April 2016. The aircraft family can accommodate up to 236 passengers and has a range of 3,100 to 12,000 km (1,700 to 6,500 nmi), depending on model.
The first member of the A320 family—the A320—was launched in March 1984, first flew on 22 February 1987, and was first delivered in March 1988 to launch customer Air France. The family was extended to include the A321 (first delivered 1994), the A319 (1996), and the A318 (2003). The A320 family pioneered the use of digital fly-by-wire flight control systems, as well as side-stick controls, in commercial aircraft. There has been a continuous improvement process since introduction.
As of 28 February 2018, a total of 8,029 Airbus A320-family aircraft have been delivered, of which 7,679 are in service. In addition, another 6,126 airliners are on firm order. It ranked as the world's fastest-selling jet airliner family according to records from 2005 to 2007, and as the best-selling single-generation aircraft programme. The A320 family has proved popular with airlines including low-cost carriers such as EasyJet, which purchased A319s and A320s to replace its 737 fleet. As of December 2017, American Airlines was the largest operator of the Airbus A320 family aircraft, operating 392 aircraft. The aircraft family competes directly with the 737 and has competed with the 717, 757, and the MD-80/MD-90.

Kassel Airport (formerly Kassel-Calden Airport, German Flughafen Kassel) is a minor international airport serving the German city of Kassel in the state of Hesse. It is located 1.9 km (1.2 mi) west[1] of Calden, 16.7 km (10.4 mi) northwest of Kassel and is mainly used for business and general aviation. There is also a flight school, an ultralight flying school, and a parachuting school based on site. Kassel features one single small passenger terminal building with basic facilities such as car rental desks and some shops. As there are no jet bridges, buses and walk-boarding are in use. The old airport used to have a single asphalt runway, 04/22 (040°/220°), which is 1,500 by 30 m (4,921 by 98 ft). There was a parallel grass strip north of the main runway, which is 700 by 30 m (2,297 by 98 ft). The new runway 09/27 has a length of 8,200 ft (2,500 m) and width of 147 ft (45 m).
The airport features two aprons, one in front of the passenger terminal for two mid-sized aircraft such as the Airbus A320 family and a separate one for general aviation aircraft. 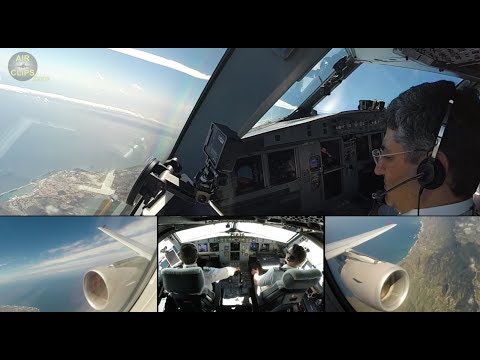 AirClips.com had the great opportunity to join a Sundair A320 flight from Kassel-Calden airport to Tenerife South in spring 2018. Sundair is a German ...