Přidáno před 4 rokem nazpět od admin
473 Zobrazení
Amazing Wamos Air gives you a deep insight into their stunning Boeing 747 operations. Watch Captain Victoriano and his First Officer Barbara all the way from the flight preparations until parking of the aircraft in tiny Rostock regional airport, today's destination. You will see hidden areas like crew rest compartments, galleys and even an elevator inside the aircraft. Unique multi-cam views during takeoff and landing using 11 cameras will show you breathtaking and memorable images. On top, tiny German destination airport Rostock-Laage only features a short 2.500 meter runway, so you can see how Goliath lands in David's backyard. Fasten seatbelts and enjoy!

Wamos Air, formerly Pullmantur Air, is a Spanish airline headquartered in Madrid. It mostly operates leisure charter flights, several of them on behalf of Pullmantur Cruises from its main base at Adolfo Suárez Madrid–Barajas Airport. As of 2016, it is 81% owned by Springwater Capital and 19% owned by Royal Caribbean Cruises Ltd.

The Boeing 747-400 is a major development and the best-selling model of the Boeing 747 family of jet airliners. While retaining the four-engine wide-body layout of its predecessors, the 747-400 embodies numerous technological and structural changes to produce a more efficient airframe. Its most distinguishing features versus preceding 747 models are 6-foot (1.8 m) winglets mounted on 6-foot (1.8 m) wing tip extensions, which are found on all 747-400s except for Japanese domestic market versions.
The 747-400 is equipped with a two-crew glass cockpit, which dispenses with the need for a flight engineer, along with more fuel-efficient engines, an optional fuel tank in the horizontal stabilizer, and revised fuselage/wing fairings. The aircraft also features an all-new interior with upgraded in-flight entertainment architecture. As on the 747-300, passenger variants include a stretched upper deck as standard. The model has a maximum capacity of 660 passengers with the 747-400D variant, and can fly non-stop for up to 7,670 nautical miles (14,200 km) with maximum payload, depending on model.
Northwest Airlines first placed the 747-400 in commercial service in February 9, 1989. The 747-400 was produced in passenger (−400), freighter (−400F), combi (−400M), domestic (−400D), extended range passenger (−400ER) and extended range freighter (−400ERF) versions. The last 747−400, a -400ERF, was delivered in 2009. The 747-400 is the second-most recent version of the Boeing 747 family, having been superseded by the improved Boeing 747-8. 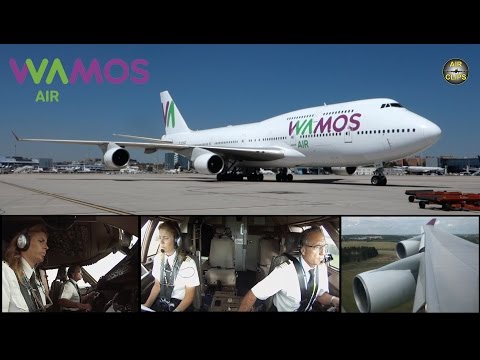 Amazing Wamos Air gives you a deep insight into their stunning Boeing 747 operations. Watch Captain Victoriano and his First Officer Barbara all the w...