Přidáno před 2 rokem nazpět od admin
76 Zobrazení
This is an exclusive short clip from our Lufthansa Airbus A320 ULTIMATE COCKPIT MOVIE Bilbao to Munich which you can watch for free at AirClips.com starting November 23rd, 2018!

Deutsche Lufthansa AG, commonly known as Lufthansa, is the largest German airline and, when combined with its subsidiaries, also the largest airline in Europe both in terms of fleet size and passengers carried during 2017. The name of the company is derived from the German word, Luft 'air' and Hansa, the Hanseatic League. Lufthansa is one of the five founding members of Star Alliance, the world's largest airline alliance, formed in 1997.
Besides its own services, and owning subsidiary passenger airlines Austrian Airlines, Swiss International Air Lines, Brussels Airlines, and Eurowings including Germanwings (referred to in English by Lufthansa as its Passenger Airline Group), Deutsche Lufthansa AG owns several aviation-related companies, such as Lufthansa Technik, as part of the Lufthansa Group. In total, the group has over 600 aircraft, making it one of the largest airline fleets in the world.
Lufthansa's registered office and corporate headquarters are in Cologne. The main operations base, called Lufthansa Aviation Center, is at Lufthansa's primary hub at Frankfurt Airport, and its secondary hub is at Munich Airport.

The Airbus A320 family consists of short- to medium-range, narrow-body, commercial passenger twin-engine jet airliners manufactured by Airbus. The family includes the A318, A319, A320 and A321, as well as the ACJ business jet. The A320s are also named A320ceo (current engine option) after the introduction of the A320neo (new engine option). Final assembly of the family takes place in Toulouse, France, and Hamburg, Germany. A plant in Tianjin, China, has also been producing aircraft for Chinese airlines since 2009, while a final assembly facility in Mobile, Alabama, United States, delivered its first A321 in April 2016. The aircraft family can accommodate up to 236 passengers and has a range of 3,100 to 12,000 km (1,700 to 6,500 nmi), depending on model.
The first member of the A320 family—the A320—was launched in March 1984, first flew on 22 February 1987, and was first delivered in March 1988 to launch customer Air France. The family was extended to include the A321 (first delivered 1994), the A319 (1996), and the A318 (2003). The A320 family pioneered the use of digital fly-by-wire flight control systems, as well as side-stick controls, in commercial aircraft. There has been a continuous improvement process since introduction.
As of 31 March 2018, a total of 8,074 Airbus A320-family aircraft have been delivered, of which 7,722 are in service. In addition, another 6,083 airliners are on firm order. It ranked as the world's fastest-selling jet airliner family according to records from 2005 to 2007, and as the best-selling single-generation aircraft programme. The A320 family has proved popular with airlines including low-cost carriers such as EasyJet, which purchased A319s and A320s to replace its 737 fleet. As of December 2017, American Airlines was the largest operator of the Airbus A320 family aircraft, operating 392 aircraft. The aircraft family competes directly with the 737 and has competed with the 717, 757, and the MD-80/MD-90.
In December 2010, Airbus announced a new generation of the A320 family, the A320neo (new engine option). The A320neo offers new, more efficient engines, combined with airframe improvements and the addition of winglets, named Sharklets by Airbus. The aircraft will deliver fuel savings of up to 15%. As of February 2018, a total of 6,025 A320neo family aircraft had been ordered by more than 70 airlines, making it the fastest ever selling commercial aircraft. The first A320neo was delivered to Lufthansa on 20 January 2016 and it entered service on 25 January 2016. 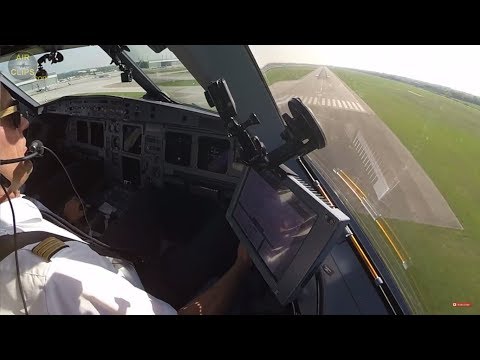 This is an exclusive short clip from our Lufthansa Airbus A320 ULTIMATE COCKPIT MOVIE Bilbao to Munich which you can watch for free at AirClips.com st...