The Sukhoi Superjet 100 (Russian: Сухой Суперджет 100) is a fly-by-wire twin-engine regional jet with 8 (VIP) to 108 (all economy) passenger seats. With development initiated in 2000, the airliner was designed and spearheaded by Sukhoi, a division of the Russian civil aerospace company (UAC), in co-operation with several foreign partners. Its maiden flight was conducted on 19 May 2008. On 21 April 2011, the Superjet 100 undertook its first commercial passenger flight, on the Armavia route from Yerevan to Moscow.
Designed to compete internationally with its An-148, Embraer E-Jet and Bombardier CSeries counterparts, the Superjet 100 claims substantially lower operating costs, at a lower purchase price of $35 million.
The final assembly of the Superjet 100 is done by Komsomolsk-on-Amur Aircraft Production Association. Its SaM-146 engines are designed and produced by the French-Russian PowerJet joint venture and the aircraft is marketed internationally by the Italian-Russian SuperJet International joint venture. On 28 January 2007, the first SSJ was transported by an Antonov 124 from Komsomolsk-on-Amur to the city of Zhukovsky near Moscow for ground tests. A representative of Sukhoi Civil Aircraft announced on 13 November 2007, the completion of static tests necessary for conducting the first flight. The Superjet was unveiled at its official rollout at Komsomolsk-on-Amur Dzemgi Airport on 26 September 2007.
In February 2008, initial test runs of the SaM146 engine were successful. An Ilyushin Il-76 LL testbed, operated by the Gromov Flight Research Institute, was also used in the engine testing. On 19 May 2008, the first test flight of the Superjet took place from Dzemgi airport, at the Komsomolsk-on-Amur Aircraft Production Association.
In July 2008, testing continued successfully. By October 2008, the first stage of Sukhoi Superjet 100's factory-based flight testing program was successfully completed. The second SSJ100 prototype had also been flown and the certification process was started. In December 2008, the second of four SSJ100 prototypes SN95003 took to the skies. The aircraft performed standard stability and handling quality tests as well as systems checks in accordance with the first flight assignment. Flight test engineers and pilots were pleased with the overall performance of the second prototype.
The deliveries were first scheduled to begin in late 2008, and Sukhoi predicted that 3 units of all variations of the Superjet 100 would be delivered by the end of 2016. On 7 July 2008, Sukhoi officially confirmed that the original schedule was too optimistic, and first deliveries would begin in December 2009.
As of January 2009, the first two aircraft had completed over 80 flights, totaling around 2,300 hours in flight and ground tests. On 1 April 2009, two Superjet 100 prototypes, 95001 and 95003, successfully completed the first long-distance flight for this aircraft, covering a distance of 3,000 kilometers from Novosibirsk to Moscow. On 17 April 2009, EASA pilots performed the first test flights on the two prototypes. According to EASA pilot feedback, the aircraft was easy to fly. On 26 July 2009, the third of four SSJ100 prototypes (SN95004) flew.
At the Paris Air Show 2009, Malév Hungarian Airlines said that it would purchase 30 Superjets worth $1 billion, providing a welcome boost to sales as it made its international debut at the 2009 Paris Air Show.
As of June 2009, 13 aircraft were under construction with the first four scheduled to be handed over to clients by the end of 2010. After 2012, the company will build 70 Superjets per year. Armenian Armavia would receive the first two aircraft, followed by Aeroflot, which has ordered a total of 30 aircraft with an option for 15 more. Other customers include Russia's Avialeasing company, Swiss Ama Asset Management Advisor and Indonesian Kartika Airlines.

ABC Aerolíneas, S.A. de C.V., operating as Interjet, is a Mexican low-cost airline with its headquarters in Lomas de Chapultepec, Miguel Hidalgo, Mexico City, Mexico. The airline operates scheduled flights to Mexico, the Caribbean, Central America, North America and South America out of Mexico City International Airport in Mexico City. It is wholly owned by the Aleman Group. It is one of the first regular low-cost airlines of Mexico and claims to offer the most extensive domestic network compared to its competitors.
The airline described itself as the "JetBlue of Mexico".
Interjet also operates several charter flights throughout the American continent, mainly in the Caribbean. 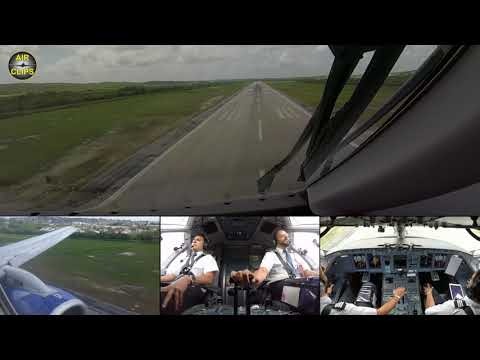 Like it? Watch the full film for free at: https://youtu.be/0Xfx8cFP-ZA The Air Clips Team was granted exclusive access to film Interjet's Superjet coc...