SCENIC Lufthansa A340-600 landing in Seoul-Incheon on a lovely sunny day! [AirClips]

Přidáno před 3 rokem nazpět od admin
88 Zobrazení
Designed to replace early-generation Boeing 747 airliners, the A340-600 is capable of carrying 379 passengers in a three-class cabin layout 13,900 km (7,500 nmi). It provides similar passenger capacity to a 747 but with 25 percent more cargo volume, and at lower trip and seat costs. First flight of the A340-600 was made on 23 April 2001. Virgin Atlantic began commercial services in August 2002. The variant's main competitor is the 777-300ER. The A340-600 will eventually be replaced by the A350-1000.
The A340-600 is 12 m (39 ft 4.4 in) longer than a -300, more than 4 m (13 ft 1.5 in) longer than the Boeing 747-400 and 2.3 m (7 ft 6.6 in) longer than the A380. It held the record as the world's longest commercial aircraft until February 2010 with the first flight of the Boeing 747-8. The A340-600 is powered by four 250 kN (56,000 lbf) thrust Rolls-Royce Trent 556 turbofans and uses the Honeywell 331–600 APU. As with the -500, it has a four-wheel undercarriage bogie on the fuselage centre-line to cope with the increased MTOW along with the enlarged wing and rear empennage. Upper deck main cabin space can be optionally increased by locating facilities such as crew rest areas, galleys, and lavatories upon the aircraft's lower deck. In early 2007, Airbus reportedly advised carriers to reduce cargo in the forward section by 5.0 t (11,000 lb) to compensate for overweight first and business class sections; the additional weight caused the aircraft's centre of gravity to move forward thus reducing cruise efficiency. Affected airlines considered filing compensation claims with Airbus.
The A340-600HGW (High Gross Weight) version first flew on 18 November 2005 and was certified on 14 April 2006.[110] It has an MTOW of 380 t (840,000 lb) and a range of up to 14,630 km (7,900 nmi), made possible by strengthened structure, increased fuel capacity, more powerful engines and new manufacturing techniques like laser beam welding. The A340-600HGW is powered by four 61,900 lbf (275 kN) thrust Rolls-Royce Trent 560 turbofans. Emirates became the launch customer for the -600HGW when it ordered 18 at the 2003 Paris Air Show; but postponed its order indefinitely and later cancelled. Rival Qatar Airways, which placed its order at the same airshow, took delivery of only four aircraft with the first aircraft on 11 September 2006. The airline has since let its purchase options expire in favour of orders for the Boeing 777-300ER.
In July 2015, seven airlines worldwide operated A340-600s. In April 2016, there were 77 A340-600s in service.

Deutsche Lufthansa AG, commonly known as Lufthansa (sometimes also as Lufthansa German Airlines), is the de facto flag carrier of Germany and also the largest airline in Europe, both in terms of overall passengers carried and fleet size when combined with its subsidiaries. It operates services to 18 domestic destinations and 197 international destinations in 78 countries across Africa, the Americas, Asia, and Europe, using a fleet of more than 280 aircraft.
Besides the actual airline named Lufthansa, Deutsche Lufthansa AG is also the parent company for several other airlines and further aviation-related branches, including Swiss International Air Lines, Austrian Airlines, Germanwings and Lufthansa Technik. With over 620 aircraft, it has one of the largest passenger airline fleets in the world when combined with its subsidiaries. In 2012, the entire Lufthansa Group carried over 103 million passengers.
Lufthansa's registered office and corporate headquarters are in Cologne. The main operations base, called Lufthansa Aviation Center (LAC), is located at Lufthansa's primary traffic hub at Frankfurt Airport. The majority of Lufthansa's pilots, ground staff, and flight attendants are based there. Lufthansa's secondary hub is Munich Airport with a third, considerably smaller one maintained at Düsseldorf Airport which transfers to Germanwings, so Lufthansa only operates just around 10 destinations (excluding seasonal) which all have been transferred to Germanwings.
Lufthansa is one of the five founding members of the Star Alliance, the world's largest airline alliance, formed in 1997.
Having been a state-owned enterprise until 1994, the majority of Lufthansa's shares are nowadays held by private investors (88.52%), as well as MGL Gesellschaft für Luftverkehrswerte (10.05%), Deutsche Postbank (1.03%), and Deutsche Bank (0.4%). Since 1970, Lufthansa has involved its employees in profit sharing, giving them the opportunity to choose between cash and preference shares. When Lufthansa was privatised, employees received more than 3% of its shares.

SCENIC Lufthansa A340-600 landing in Seoul-Incheon on a lovely sunny day! [AirClips] 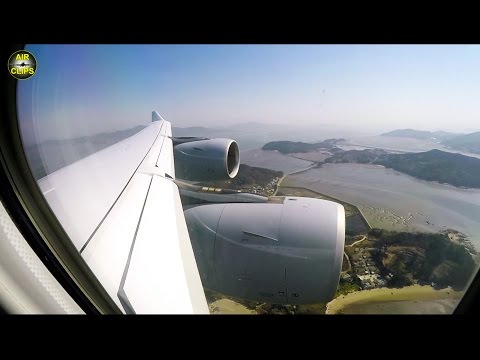