Following the arrival of the RAF VIP Voyager to its base at RAF Brize Norton in Oxfordshire, post the completion of its smart new paint scheme, the aircraft returned to its primary role supporting operational training today acting as a ‘petrol station in the sky’ offering Air-to-Air refuelling (AAR) to RAF Lightning and Typhoon fighters during Exercise CRIMSON OCEAN.

After several weeks of painstaking work, the Voyager was confirmed as being ready to undertake all operational roles including AAR and personnel transport alongside the rest of the RAF Voyager fleet. Taking off from RAF Brize Norton, the aircraft spent most of the day airborne to provide several refuelling stops for the fighters taking part in the joint RAF and Royal Navy exercise.

“The new livery looks superb but the reality is that flying this aircraft is no different to any of the other aircraft that make up the Voyager Force. It is capable of conducting the same essential Defence tasks, not least of which is the air-to-air refuelling role that allows us to deploy our Typhoon and Lightning aircraft to every corner of the globe. Taking part in Exercise Crimson Ocean is a great opportunity to show what Voyager can do.”

Exercise CRIMSON OCEAN allows the Royal Navy and RAF to train and hone their ability to deliver routine fighter and helicopter operations in a range of environments from the aircraft carrier HMS Queen Elizabeth. Lightning aircraft from 617 Squadron have been onboard the carrier since 10 July when they left their base at RAF Marham in Norfolk.

So whilst for the time being, the VIP Voyager is back to its ‘day job’ the aircraft will soon be fulfilling its important VIP role, displaying the new Union Flag livery for the UK across the world when transporting Ministerial, Royal and their delegations on trade, diplomatic and other missions.

• The aircraft, known as Vespina is also referred to as 'ZZ336', its military registration number, was previously visually indistinguishable from the rest of the RAF Voyager Fleet. The new paint scheme will better reflect its VIP mission and contribution to ‘Global Britain’. The paintwork concludes a refurbishment stemming from the 2015 SDSR.
• The Voyager was leased by the RAF from Air Tanker to carry out a range of missions, principally:
• The Voyager can carry up to 111 tonnes of fuel; this is the highest capacity of all tanker aircraft, even those with additional fuel tanks in the cargo deck. It has the capacity of offloading 50,000 kg of fuel to a broad range of receivers during a four-hour loitering mission at over 1,000 nm from its take-off point.
• The Voyager can carry a maximum payload of up to 45 tonnes, combining the passenger cabin and the lower deck: up to 300 passengers; MedEvac cabin layout with 40 stretchers, 20 seats for medical staff and 100 passengers; up to 37 tonnes of cargo in the lower deck; 27 LD3 containers or eight military pallets.
• Voyager tanker support enables the deployment of RAF fighter aircraft over a long distance, such as the ongoing Typhoon deployment on the NATO Baltic air policing mission in Lithuania. A Voyager can support the deployment of four fighter aircraft plus 50 personnel and 12 tonnes of freight (luggage, spare parts and equipment) in one direct flight over 5,200 km, e.g. from Europe to Afghanistan.
• Key facts: a Voyager:
o Is based on the Airbus A330 aircraft.
o Weighs 293 tonnes.
o Can carry up to 291 passengers.
o Has a wingspan of 60m.
o Can carry 111 tonnes of fuel or 45 tonnes of freight.
o Has a crew of 2 (pilot and co-pilot) on passenger carrying missions.
o Has 8 cabin crew when passenger carrying or else 11 cabin crew on VIP tasks.
o Has a surface area of 2874 metres.
• On 5 June 2020 an RAF Voyager set a new world record for the fastest ever flight between the UK and the Falkland Islands. The journey of 6834 nautical miles was completed in 15 hours and 9 minutes, breaking the previous record, which had been set in 1987 by an RAF VC-10 aircraft, by 36 minutes.
• Design work was performed by AirTanker Limited and Airbus DS (the Design Organisation for Voyager) from February 2020 to May 2020. Repainting the aircraft was conducted by the Marshall Aerospace and Defence Group at their facility in Cambridge in June 2020.

© UK MoD Crown copyright 2020 The appearance of MOD or UK Government visual information does not imply or constitute endorsement. 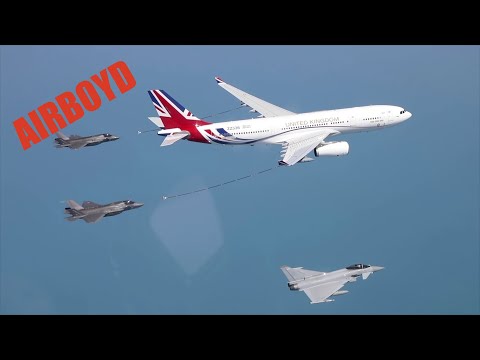