Přidáno před 2 rokem nazpět od admin
174 Zobrazení
Largest ever turboprop airplane in the world! After a break of eight years, the world has one Antonov An-22A Antei back in commercial service again - and Air-Clips was on board for you!

Out of our series of four cockpit flights, the one shown in this ULTIMATE COCKPIT MOVIE represents the longest stretch of the entire journey! Be on board when our Antei flies nonstop all the way from Abu Dhabi to Kiev Gostomel in about 10 (!!!) hours!

The Antonov An-22 "Antei" is a heavy military transport aircraft designed by the Antonov Design Bureau in the Soviet Union. Powered by four turboprop engines each driving a pair of contra-rotating propellers, the design was the first Soviet wide-body aircraft and remains the world's largest turboprop-powered aircraft to date. The An-22 first appeared publicly outside the Soviet Union at the 1965 Paris Air Show. Since then, the model has seen extensive use in major military and humanitarian airlifts for the Soviet Union.
In the late 1950s, the Soviet Union required a large military transport aircraft to supplement the Antonov An-8 and An-12s then entering service. Originally known as the An-20, the model is a conventional multi-engined high-wing design. In the early 1960s, the Antonov bureau produced a wooden mock up at its Kiev, Ukraine, workshops of what was designated the Model 100. The prototype, now designated the An-22, was rolled out on 18 August 1964 and first flew on 27 February 1965. The prototype was given the name Antheus and, after four-months of test flying, was displayed at the 1965 Paris Air Show. All aircraft were built at the Tashkent State Aircraft Factory and the first military delivery was made to the Air Transport Wing at Ivanovo Airbase in 1969.
The aircraft was designed as a strategic airlifter, designed specifically to expand the Soviet Airborne Troops' capability to land with their then-new BMD-1 armoured vehicles. The An-22 cargo hold can accommodate four BMD-1 compared to only one in the An-12.
It also has the capability to takeoff from austere, unpaved, and short airstrips, allowing airborne troops to perform air-landing operations. This is achieved by four pairs of contra-rotating propellers, similar to those on the Tupolev Tu-114. The engines generate significant thrust, and produce a slipstream over the wings and large double-slotted flaps. The landing gear is ruggedized for rough airstrips, and, in early versions, tire pressures could be adjusted in flight for optimum landing performance, although that feature was removed in later models.
The An-22 follows traditional cargo transport design with a high-mounted wing allowing a large cargo space of 33m in length and a usable volume of 639m³. The forward fuselage is fully pressurized and provides space for 5 to 8 crew and up to 28 passengers, but the cargo space is pressurized to only 3.55 PSI / 0.245 bar allowing for a lighter airframe. A door equipped with pressure bulkhead is located at frame 14, separating the cargo attendant's compartment from the main cargo compartment. This allows the rear cargo doors to be opened during flight for paratroops and equipment drop. Like the An-12, the aircraft has a circular fuselage section. The An-22 has set a number of payload and payload-to-height world records.
The An-22 has the general appearance of an enlarged version of the earlier Antonov An-12 except that it is fitted with a twin tail. This gives the An-22 better engine-out performance, and reduces height restrictions for hangars. Also of note are large anti-flutter masses on the top of each tail.
Only one production variant was built, the standard An-22. Prototypes, such as the one first featured at the 1965 Paris Air Show had fully glazed noses that lacked the nose mounted radar of production models. Those aircraft had the radar mounted below the right wheel well fairing, forward of the wheels.

Antonov Airlines is a Ukrainian cargo airline, a division of the Antonov aviation company. It operates international charter services in the world of oversized cargo market. Its main base is Gostomel Airport near Kiev. The company owns the Antonov An-225, the world's largest operational cargo aircraft and the only one completed. The airline was established and started operations in 1989 through a marketing agent agreement with Air Foyle to market Antonov An-124 Ruslan cargo charters worldwide. This relationship ended in June 2006. The same month Antonov Airlines and another large player in the global specialty air cargo business, Volga-Dnepr Airlines (Russia), established a joint venture company — Ruslan International — where each company has a 50% stake. The joint operation of the Ukrainian and Russian fleets allows them to share the combined An-124-100 commercial fleet of seventeen aircraft (seven of which belong to Antonov Airlines) and the only Antonov An-225 in service worldwide — the largest cargo aircraft in the world. 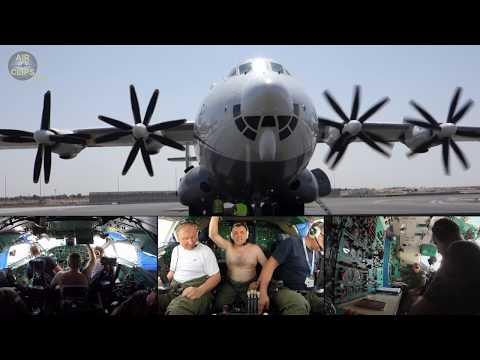 Largest ever turboprop airplane in the world! After a break of eight years, the world has one Antonov An-22A Antei back in commercial service again - ...