Přidáno před 3 rokem nazpět od admin
66 Zobrazení
AirClips.com was exclusively invited to join Captain Inge and First Officer Claudia on their Lufthansa Cargo MD-11F rotation from Frankfurt to Mumbai (India), Hongkong, Novosibirks (Russia) and back to Frankfurt. Every leg of this rotation will be published as a separate FULL ULTIMATE COCKPIT MOVIE over time. Welcome aboard - it's all for free!

This is a short sequence from our first full movie, available FOR FREE under this link: https://youtu.be/bzsGG-SPkVs

The McDonnell Douglas MD-11 is an American three-engine medium- to long-range wide-body jet airliner, manufactured by McDonnell Douglas and, later, by Boeing Commercial Airplanes. Based on the DC-10, it features a stretched fuselage, increased wingspan with winglets, refined airfoils on the wing and smaller tailplane, new engines and increased use of composite materials. Two of its engines are mounted on underwing pylons and a third engine at the base of the vertical stabilizer. It also features a glass cockpit that decreases the flight deck crew from the three required on the DC-10 to two by eliminating the need for a flight engineer. Although the MD-11 program was launched in 1986, McDonnell Douglas started to search for a DC-10 derivative as early as 1976. Two versions were considered then, a DC-10-10 with a fuselage stretch of 40 feet (12 m) and a DC-10-30 stretched by 30 feet (9.1 m). That later version would have been capable of transporting up to 340 passengers in a multi-class configuration, or 277 passengers and their luggage over 5,300 nautical miles (9,800 km). At the same time, the manufacturer was seeking to reduce wing and engine drag on the trijet. Another version of the aircraft was also envisaged, the "DC-10 global", aimed to counter the risks of loss of orders for the DC-10-30 that the Boeing 747SP and its range were creating. The DC-10 global would have incorporated more fuel tanks.

Lufthansa Cargo AG is a German cargo airline and a wholly owned subsidiary of Lufthansa. It operates worldwide air freight and logistics services and is headquartered at Frankfurt Airport, the main hub of Lufthansa. Besides operating dedicated cargo planes, the company also has access to cargo capacities of 350 passenger aircraft of the Lufthansa Group. 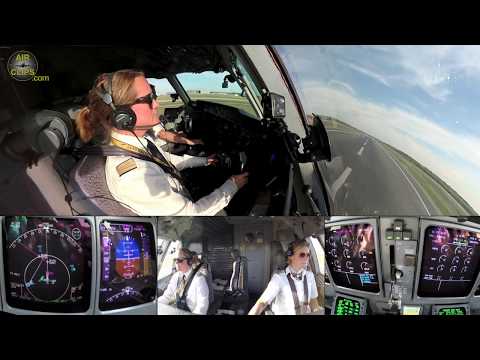 AirClips.com was exclusively invited to join Captain Inge and First Officer Claudia on their Lufthansa Cargo MD-11F rotation from Frankfurt to Mumbai ...