Přidáno před 1 rok nazpět od admin
41 Zobrazení
First Officer Cris is seen perfectly piloting his huge Boeing 777F and in fact it was AirClips bringing him there! Don't believe it? It's true! Being a B737 pilot he watched the AirClips.com full cockpit movies on Captain Rikard and his Lufthansa Cargo B777F crew and Chris decided he wanted to fly that thing - now watch how cool he succeeded!

AirClips.com was exclusively invited to have an eye on the pilots of German cargo specialist Aerologic, a joint venture subsidiary airline of Lufthansa Cargo and DHL.

This is an exclusive short scene from the first of four full cockpit films about different crews sharing their exciting pilot's life with you AirClips.com follower - in full HD and of course TOTALLY FOR FREE! This is actually the fourth and last of the four legs of this entire journey where the crew returns the aircraft home - an appetizer for the full journey with three full films ahead!

The other three full flight movies will take you all the way from Leipzig to Bangkok, to Singapore and on to Bangalore with Captain Markus and F/O Daniel... big things to come, look forward to this full FREE adventure!

AeroLogic is a German cargo airline based in Schkeuditz near Leipzig. It is a joint-venture between DHL Express and Lufthansa Cargo which operates scheduled international and long-haul cargo services out of its hubs Leipzig/Halle Airport and Frankfurt Airport. Managing Directors are Wolfgang Raubgier and Joe Moser. The company was founded by DHL Express and Lufthansa Cargo on 12 September 2007. Flight operations started on 29 June 2009] following the delivery of its first aircraft on 12 May of that year, a Boeing 777 Freighter, making AeroLogic the first German operator of that type. AeroLogic's operations are broadly divided in two. From Monday to Friday it mainly flies to Asia, serving the DHL Express network. On weekends, it mainly operates to the United States on behalf of Lufthansa Cargo.

The Boeing 777 (Triple Seven) is a long-range wide-body twin-engine jet airliner developed and manufactured by Boeing Commercial Airplanes. It is the world's largest twinjet and has a typical seating capacity of 314 to 396 passengers, with a range of 5,240 to 8,555 nautical miles (9,704 to 15,844 km). Commonly referred to as the "Triple Seven", its distinguishing features include the large–diameter turbofan engines, long raked wings, six wheels on each main landing gear, fully circular fuselage cross-section,[6] and a blade-shaped tail cone. Developed in consultation with eight major airlines, the 777 was designed to replace older wide-body airliners and bridge the capacity difference between Boeing's 767 and 747. As Boeing's first fly-by-wire airliner, it has computer-mediated controls. It was also the first commercial aircraft to be designed entirely with computer-aided design.
The 777 is produced in two fuselage lengths as of 2018. The original 777-200 variant entered commercial service in 1995, followed by the extended-range 777-200ER in 1997. The stretched 777-300, which is 33.25 ft (10.1 m) longer, followed in 1998. The initial 777-200, extended-range -200ER, and -300 versions are equipped with General Electric GE90, Pratt & Whitney PW4000, or Rolls-Royce Trent 800 engines. They have since been collectively referred to as 777 Classics. The extended-range 777-300ER and ultra long-range 777-200LR variants entered service in 2004 and 2006 respectively, while the 777F, a freighter version, debuted in February 2009; these second-generation variants all feature high-output GE90 engines and extended raked wingtips. The 777-200LR is one of the world's longest-range airliners, able to fly more than halfway around the globe and holds the record for the longest distance flown non-stop by a commercial aircraft. In November 2013, Boeing announced the development of the third-generation of the 777, the 777X, consisting of the 777-8 and 777-9 variants. The 777X features composite folding wings and GE9X engines plus further technologies developed for the Boeing 787, and is scheduled to enter service by 2020.
In the 2000s, Boeing began studying the conversion of 777-200ER and -200 passenger airliners into freighters, under the name 777 BCF (Boeing Converted Freighter). The company has been in discussion with several airline customers, including FedEx Express, UPS Airlines, and GE Capital Aviation Services, to provide launch orders for a 777 BCF program. 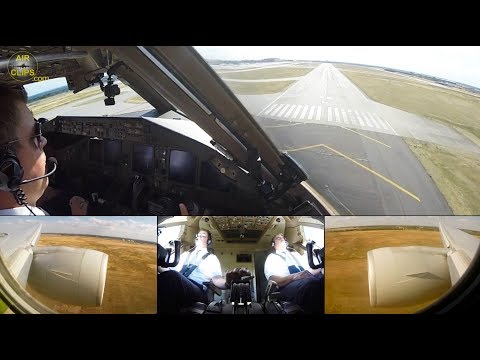 First Officer Cris is seen perfectly piloting his huge Boeing 777F and in fact it was AirClips bringing him there! Don't believe it? It's true! Being ...