Přidáno před 1 rok nazpět od admin
24 Zobrazení
Do not miss to watch the full movie FOR FREE at https://youtu.be/vMpiBnmg5ig as well as the takeoff and landing shown in this movie as exclusive 360-degree videos, ideally using your VR goggles:

All for free - proudly sponsored by our sister channel 360.AirClips.com

The AirClips.com team was invited to join Captain Boris and first officers David and David on their 11-hour domestic flight from St. Denis (La Reunion Island, France) to Paris (Charles de Gaulle, France). Come with us and enjoy the massively impressive friendliness of the Air Austral crew, stunning cockpit views from 20 different perspectives as well as the world-class Business Class product of this traditional French airline.

Air Austral is a French airline with its headquarters at Roland Garros Airport in Sainte-Marie, Réunion, France. The airline's main base of flight operations is Roland Garros Airport. It operates scheduled services from Réunion to metropolitan France, South Africa, Thailand, India and a number of destinations in the Indian Ocean. The company has 900 employees. Air Austral was created in December 1974 by local businessman Gérard Ethève. It was Réunion's first commercial airline, known as Réunion Air Services (RAS). By August 1977 RAS had started regional services from Sainte-Marie to Mayotte[6] with a 32-seat Hawker Siddeley HS 748 turboprop. RAS became Air Réunion in December, 1986.
In October 1990 Sematra, a company 46% owned by the local councils of Réunion with the remaining shares owned by banks and other private partners, purchased Air Réunion. A month later, Air Réunion became Air Austral. Two months later, Air Austral bought its first Boeing 737-500. Another 737-300 was acquired in 1994, and in 1997 the airline purchased a 737-300QC, which enabled both passenger and cargo only traffic.
In 2000 the airline took delivery of an ATR 72-500, a short-haul turboprop. By then, Air Austral operated from both Roland Garros Airport in Sainte-Marie and Pierrefonds Airport in Saint Pierre with scheduled services to Mayotte, Johannesburg, South Africa, Comoros, Mauritius, the Seychelles, and three destinations in Madagascar (Antananarivo, Tamatave, Nosy Be, Majunga). In 2003, Air Austral launched its first long-haul service between Réunion and Paris, with two Boeing 777-200ERs. The two Boeing 777s were joined by a third Boeing 777-200ER in 2005. A second long-haul route from Réunion to Marseille and Lyon was established.
In 2007, a third long-haul service to Toulouse via Marseille started. In 2008, the airline introduced new uniforms for staff and crew members, designed by Balenciaga. The second ATR 72-500 was added to the fleet, followed by a third a few months later. In April 2009, Air Austral started a new service to Sydney and New Caledonia, thus opening up a new route between Paris and Sydney via Réunion. The airline also acquired two Boeing 777-300ERs. In November, it placed a firm order for two all-economy class 840-seat Airbus A380s, for delivery in 2014. These are intended for Air Austral's Réunion-Paris flights. In June 2010, it was announced that Air Austral would start scheduled flights from Réunion to Bordeaux and Nantes from February 2011.
In August 2011, Air Austral received its first Boeing 777-200LR. In April 2012, founder and chief executive Gérard Ethève was replaced by Marie-Joseph Malé following financial difficulties caused by risky business decisions made worse by high fuel prices. Non-profitable lines to Nouméa, Sydney, Marseille, Bordeaux, Nantes, Toulouse and Lyon were closed. The company has since returned to profit. Also in April 2012, Air Austral was unable to pay for a new 777-200LR awaiting delivery. The company is looking to sell on the plane instead of taking delivery. Following this development, Air Austral announced in May 2012 that it would defer or cancel its order for 2 Airbus A380s, with a decision to be made by the end of June 2012.

In October 2015, the company announced the sale of its single Boeing 777-200LR to Florida-based broker Atlas Aviation in November 2015. Air Austral simultaneously announced the lease, from November 2015 to May 2016 of a Boeing 737-300QC (QC for quick change) from ASL Airlines France (formerly Europe Airpost). The plane involved was F-ODZZ, a convertible version of the 737-300 (the cabin configuration can be changed from passengers to freight) that had actually already been in Air Austral service between 1997 and 2005. It was used until the first of the two Boeing 787-8s ordered by the company was delivered in May 2015. 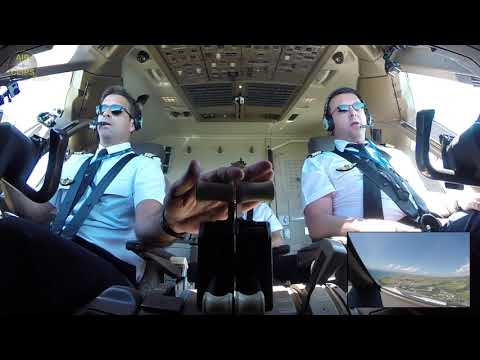 Do not miss to watch the full movie FOR FREE at https://youtu.be/vMpiBnmg5ig as well as the takeoff and landing shown in this movie as exclusive 360-d...