Přidáno před 1 rok nazpět od admin
26 Zobrazení
Airbus A310s are getting more and more rare these days and even in the German Air Force their days are counted as they will soon be replaced by a multinational European fleet of Airbus A330s. Thus a good point in time for the AirClips team to join a Luftwaffe flight from Cologne Bonn to Tiflis and back with their 20+ cameras for creating a thorough documentation of both this wonderful aircraft type and the super professional airline-like flight operations of Deutsche Luftwaffe.

This is an exclusive scene from the full A310 ULTIMATE COCKPIT MOVIE of that rotation (two flights in one film) which will also be published on this channel - totally free of charge as always - on Friday December 21st 2018 10am CET!

Also do not miss to watch the takeoff and landing shown in this movie as exclusive 360-degree videos, ideally using your VR goggles:

The Airbus A310 is a medium- to long-range twin-engined wide-body jet airliner that was developed and manufactured by Airbus, then a consortium of European aerospace manufacturers. It was the second airliner to be produced by the company, the first being the A300. The A310 is a smaller derivative of the A300, which held the distinction of being the first twin-engined widebody airliner.

The German Air Force (German: Luftwaffe) is the aerial warfare branch of the Bundeswehr, the armed forces of Germany. With a strength of 27,704 personnel (30 June 2018), it is the fourth largest air force within the European Union, after the air forces of the United Kingdom, France and Italy. Although its budget has been significantly reduced since the end of the Cold War in 1989–1990, the Luftwaffe is still among the best-equipped air forces in the world.
The German Air Force (as part of the Bundeswehr) was founded in 1956 during the era of the Cold War as the aerial warfare branch of the armed forces of then West Germany. After the reunification of West and East Germany in 1990, it integrated parts of the air force of the former German Democratic Republic, which itself had been founded in 1956 as part of the National People's Army. There is no organizational continuity between the current German Air Force and the former Luftwaffe of the Wehrmacht combined forces founded in 1935, which was completely disbanded in 1945/46 after World War II. The term Luftwaffe that is used for both the historic and the current German air force is the German-language generic designation of any air force. 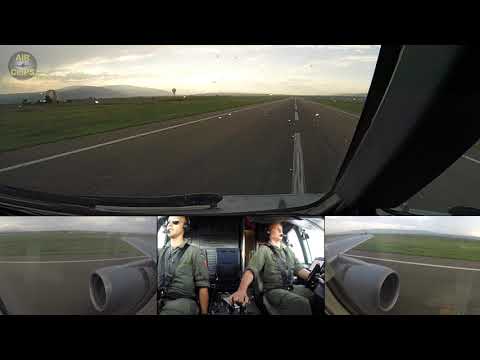 Airbus A310s are getting more and more rare these days and even in the German Air Force their days are counted as they will soon be replaced by a mult...