Přidáno před 10 měsíci nazpět od admin
24 Zobrazení
The Antonov An-24 (Russian/Ukrainian: Антонов Ан-24) is a 44-seat twin turboprop transport/passenger aircraft designed in 1957 in the Soviet Union by the Antonov Design Bureau and manufactured by Kiev, Irkutsk and Ulan-Ude Aviation Factories. First flown in 1959, the An-24 was produced in some 1,000 units of various versions; in 2019 there are 109 still in service worldwide, mostly in the CIS and Africa.

It was designed to replace the veteran piston Ilyushin Il-14 transport on short to medium haul trips, optimised for operating from rough strips and unprepared airports in remote locations. The high-wing layout protects engines and blades from debris, the power-to-weight ratio is higher than that of many comparable aircraft and the machine is rugged, requiring minimal ground support equipment.

Due to its rugged airframe and good performance, the An-24 was adapted to perform many secondary missions such as ice reconnaissance and engine/propeller test-bed, as well as further development to produce the An-26 tactical transport, An-30 photo-mapping/survey aircraft and An-32 tactical transport with more powerful engines. Various projects were envisaged such as a four jet short/medium haul airliner and various iterations of powerplant.

The main production line was at the Kiev-Svyatoshino (now "Aviant") aircraft production plant which built 985, with 180 built at Ulan Ude and a further 197 An-24T tactical transport/freighters at Irkutsk. Production in the USSR was shut down by 1978.
Production continues at China's Xi'an Aircraft Industrial Corporation which makes licensed, reverse-engineered and redesigned aircraft as the Xian Y-7, and its derivatives. Manufacture of the Y-7, in civil form, has now been supplanted by the MA60 derivative with western engines and avionics, to improve performance and economy, and widen the export appeal. 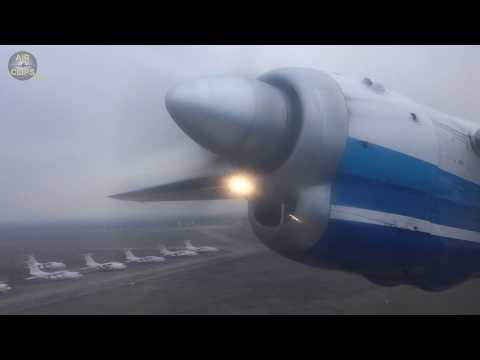 The Antonov An-24 (Russian/Ukrainian: Антонов Ан-24) is a 44-seat twin turboprop transport/passenger aircraft designed in 1957 in the Soviet Union by ...