Přidáno před 3 rokem nazpět od admin
3,554 Zobrazení
Alaska Airlines is an American airline based in the Seattle metropolitan area, Washington. Before this they were McGee Airways in 1932, offering flights from Anchorage, Alaska. Today, Alaska has flights to more than one hundred destinations in the contiguous United States, Alaska, Hawaii, Canada, Costa Rica and Mexico. The airline is a major air carrier and, along with its sister airline Horizon Air is part of the Alaska Air Group. The airline has been ranked by J. D. Power and Associates as having the highest customer satisfaction of the traditional airlines for nine consecutive years.
The airline operates its largest hub at Seattle–Tacoma International Airport (known as Sea-Tac). It also operates secondary hubs in Los Angeles, Portland and Anchorage, and focus cities at San Diego and San Jose. Although most of its revenue and traffic comes from locations outside of Alaska, the airline plays a major role in air transportation in the state. It operates many flights linking small towns to major transportation hubs and carries more passengers between Alaska and the contiguous United States than any other airline.
Alaska Airlines is not a member of any of the three major airline alliances. However, it has codeshare agreements with some members of oneworld, such as American Airlines, British Airways, and LATAM Chile, and with some SkyTeam members, including Air France, KLM, Korean Air and Delta Air Lines. Delta, despite cooperating through codeshares, is a major competitor to Alaska Air in its Sea-Tac market. The Alaska Air Group has been a part of the Dow Jones Transportation Average since 2011, when it replaced the then-parent company of American Airlines, AMR Corporation, in the index.
On January 25, 2016, Alaska Airlines unveiled a new update to its brand, including a new logo and livery, for the first time in 25 years.
On April 4, 2016, Alaska Air Group announced it will acquire Virgin America for $57 per share. The acquisition is expected to be completed by January 1, 2017.The total price for the acquisition will be approximately $2.6 billion. Alaska Air Group will continue to honor the Loyalty programs of both groups with no foreseen changes. Virgin America's founder Richard Branson is "sad" and disappointed with the merger. Virgin America shareholders have voted to approve the merger.
The 737-800 is a stretched version of the 737-700, and replaces the 737-400. It also filled the gap left by the decision to discontinue the McDonnell Douglas MD-80 and MD-90 following Boeing's merger with McDonnell Douglas. The −800 was launched by Hapag-Lloyd Flug (now TUIfly) in 1994 and entered service in 1998. The 737-800 seats 162 passengers in a two-class layout, or 189 in one class, and competes with the A320. For many airlines in the U.S., the 737-800 replaced aging Boeing 727-200 trijets.
The 737-800 is also among the models replacing the McDonnell Douglas MD-80 series aircraft in airline service; it burns 850 US gallons (3,200 L) of jet fuel per hour, or about 80 percent of the fuel used by an MD-80 on a comparable flight, even while carrying more passengers than the latter. According to the Airline Monitor, an industry publication, a 737-800 burns 4.88 US gallons (18.5 L) of fuel per seat per hour.
On August 14, 2008, American Airlines announced 26 orders for the 737-800 (20 are exercised options from previously signed contracts and six are new incremental orders) as well as accelerated deliveries.Ryanair, an Irish low-cost airline is among the largest operators of the Boeing 737-800, with a fleet of over 300 aircraft serving routes across Europe and North Africa. In November 2015, 4,120 -800, 67 -800A, and 21 -800 BBJ2 aircraft have been delivered with 936 unfilled orders.
In 2011, United Airlines operated the first U.S. commercial flight powered by a blend of algae-derived biofuel and traditional jet fuel flying a Boeing 737-800 from Houston to Chicago to reduce its carbon footprint.
In February 2016 Boeing launched a passenger to freighter conversion program designated the 737-800BCF (for Boeing Converted Freighter). Boeing started the program with orders for 55 conversions with the first converted aircraft due to be being delivered in late 2017. 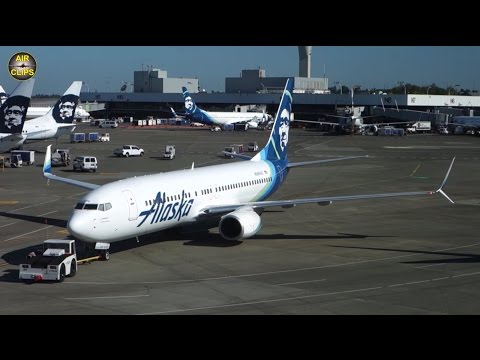 Alaska Airlines is an American airline based in the Seattle metropolitan area, Washington. Before this they were McGee Airways in 1932, offering fligh...